Does Evidence Support The Claim That Adam’s Bridge (Rama’s Bridge) Is The Same One Described In Literature? Historians, archeologists and researchers into our distant past insist that civilized life began on the Earth about 5,000 years ago. They point to the fact that there is no hard evidence to support the existence of a preexisting culture prior to the rise of the Sumerians and the Egyptians. When alternative historians such as John Anthony West, Robert Schoch and Graham Hancock, propose that structures on the Giza plateau in Egypt may be far older than currently accepted, their claims are quickly dismissed. Unfortunately for us, no record exists of their construction.   Thus, these complex masterpieces are placed in the generally accepted timeline of human development and culture.

But what if there was evidence? What if a structure that was clearly identified in our written and oral traditions have been found? And what if the stories associated with that site put it clearly outside the generally accepted timeline? If an analysis of both the structure and the myth were done and they equally were supported by modern science, could it change the face of history, a history we held so dearly by current science? 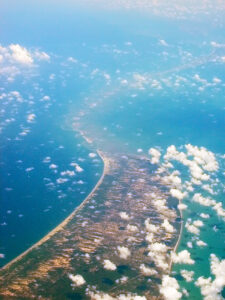 This just might be what has happened in a newly discovered site in India. Located in the Palk Strait off the Southeastern edge of India is a chain of limestone shoals. A shoal or sandbar is characterized by a long and narrow strip of land typically composed of sand, silt and small pebbles that have been deposited over time. This strip of land was once believed to be a natural formation, however, images taken by a NASA satellite has shown this land formation to be a long broken bridge under the ocean’s surface. Now called “Adam’s Bridge“, it extends 18 miles from mainland India to modern day Sri Lanka.

Is Rama Setu (Rama’s Bridge) The Bridge Mentioned In The Ramayana?

Hindu tradition has long held the belief that this strip of land was a bridge built by their beloved deity Rama as described in the Hindu epic the Ramayana. It has been referred to since antiquity as “Rama’s Bridge” or Rama Setu. Rama is a popular figure in Hindu mythology. The book that chronicles his life, the Ramayana, is a time honored classic. It tells of a time when the gods flew on ships through the air and of giants and monsters that walked the earth. Researchers who have analyzed the Ramayana state that it is an overambitious work a fiction. Is that true? Or is it possible that Adam’s Bridge is actually the structure described in this Indian classic?

A number of pieces of evidence support the claim that Adam’s Bridge is the same one described in literature.

Summary Of The Ramayana

Rama, according to the Ramayana, was sent into exile because of a promise his father had made many years before. Rama was joined by his brother Lakshmana and his wife Sita. Through the course of a number of unfolding events, Sita is kidnapped by the 10-headed demon-king Ravana. Rama, in an attempt to rescue Seta, assembles an army which includes a large group of ape men, the Vanara. 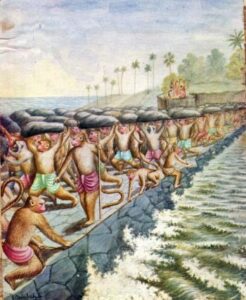 It is discovered that Sita is being held captive on the island of Lanka. Rama, unable to move his massive forces of ape men across the ocean, is advised by the sea god to build a bridge across the water. Rama enlists the help of the Vanara for its construction. The Vanara build a causeway between the mainland to Lanka.  They constructed it out of huge trees and rocks and boulders, which are described as resembling mountains. The building project is said to have lasted for five days and to have been 100 leagues in length. The bridge, once completed, allowed Rama to transport his army of Vanara across the ocean to Lanka. Once there, Ravana is killed and Sita, Rama’s wife, is returned.

The Ramayana & The Treta Yuga

According to the Hindu tradition, Rama lived during the Treta Yuga.  The Treta Yuga began 2,165,000 years ago and extended until about 869,000 years ago. On the surface, this claim seems absurd. One assumption that is often made is that Rama and the many characters that fill the Ramayana are men and women as we currently know them. This however does not explain individuals like the 10-headed demon-king Ravana and other strange individuals who inhabit the Ramayana‘s pages. If you let go of the belief, just for one moment, that the figures described in this epic tale were human as we currently know them to exist, you will see how only in this light will all of this make sense. 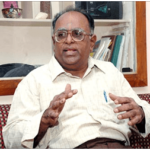 To begin our assessment as to the validity of the claim that Adam’s Bridge is the same one talked about in myth, let us first look at the bridge itself. Dr. Badrinarayanan, the former director of the Geological Survey of India performed a survey of this structure and concluded that it was man-made. Dr. Badrinarayanan and his team drilled 10 bore holes along the alignment of Adam’s Bridge. What he discovered was startling. About 6 meters below the surface he found a consistent layer of calcareous sand stone, corals and boulder like materials. His team was surprised when they discovered a layer of loose sand, some 4-5 meters further down.  They then unearthed hard rock formations below that.

A team of divers went down to physically examine the bridge. The boulders that they observed were not composed of a typical marine formation. They were identified as having come from either side of the causeway. Dr. Badrinarayanan also indicates that there is evidence of ancient quarrying in these areas. His team concluded that materials from either shore were placed upon the sandy bottom of the water to form the causeway.

Rama & The Vanara, The Ape Men

With the creation of this engineering marvel revealed, we will turn our attention to additional evidence that supports its connection to the Ramayana, in particular its claim to have been constructed during the Treta Yuga. Earlier we asked you to suspend your belief about the nature of the individuals portrayed in the Ramayana. And it is not to the gods, the monster nor the main character Rama that we would like to draw your attention.  Instead we would like to discuss the Vanara, the ape men, who constructed the bridge for Rama.

The Vanara, according to the Ramayana, were the children of the gods, who were born in the form of the ape. The gods sired the Vanara just after Rama’s birth in order to help Rama in his war against Ravana.

Are The Vanara Actually Homo erectus?

Who were these ape men? Could the stories of the Vanara we find in myth be describing our earliest ancestors? Are they talking about us, mankind? It is entirely possible.

In addition to these physical changes, sites were the bones of Homo erectus have been discovered show evidence that these early men lived in small communities, living in huts as temporary shelters, wore clothes and created stone tools. In a nutshell, they began to display early signs of civilization, a trait that had not been seen before in any other primate group. These “ape men” literally did live during the Treta Yuga.  Are the Vanara of myth our ancestors?

It is interesting to note where the name Adam’s Bridge came from.  According to Islamic legend, Adam, the first man, traveled across this bridge when he was expelled from paradise. Could Adam, the “first man” and our distant relative also have been a Homo erectus?

Even though the earliest known written copy of the Ramayana only dates back to 1500 BCE this epic tale is believed to be much older. Is Adam’s Bridge the same one described in literature? We think so. What do you think?